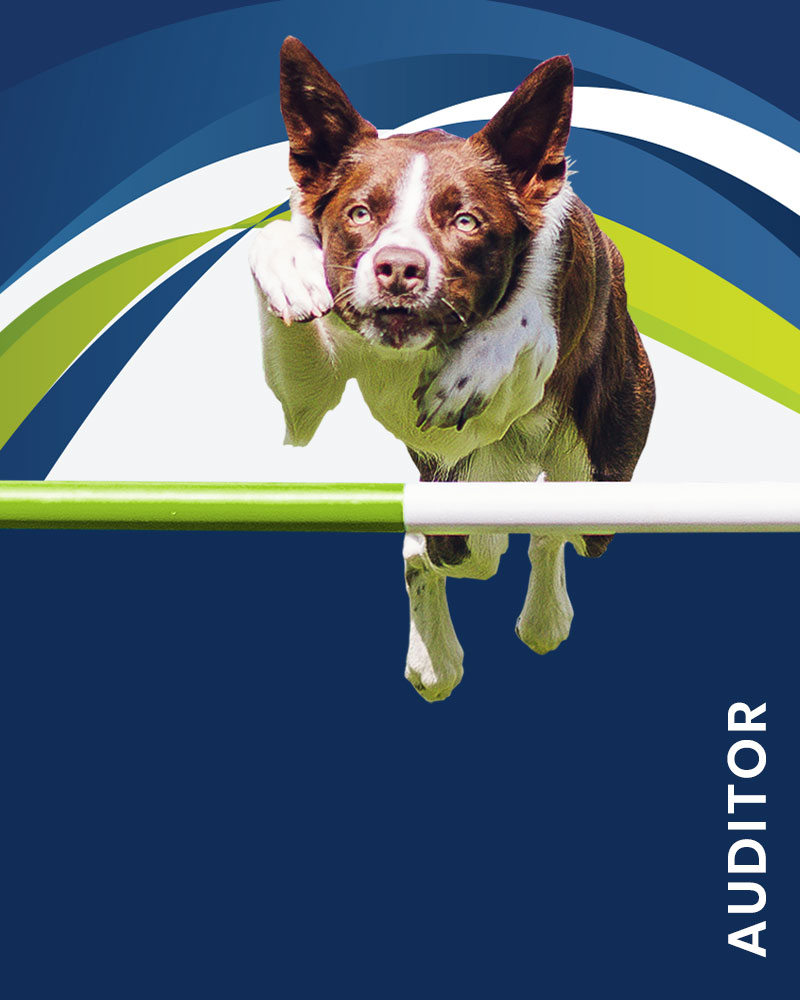 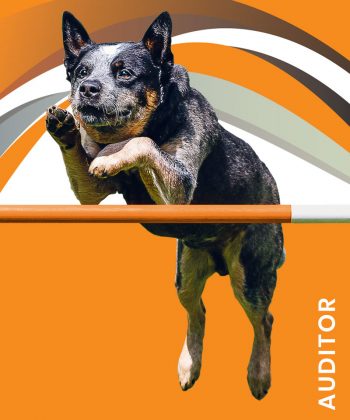 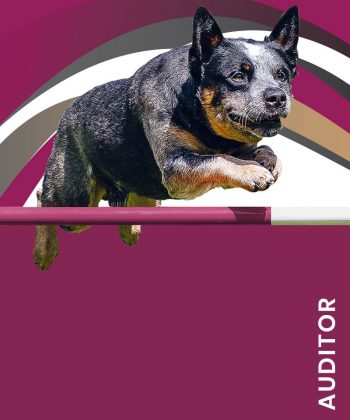 Mastering Out – In Auditor

Jumping gymnastics specially designed for your dog.
JUMPS WITH BACKSIDE AND THREADLE APPROACHES COMBINE SEVERAL DIFFERENT JUMPING SKILLS AND ARE CHALLENGING FOR YOUR DOG.

Agility is changing rapidly and handler skills and techniques are constantly improving.
The communication and timing between Handlers and Dogs are becoming more and more important. The courses are faster and more technically demanding on both dog and handler.
The dogs are moving at such high speeds and as such they need to learn how to handle their bodies safely, fluidly and confidently at these speeds in order to react quickly to their information being given. On top of these components one of the most important skills is for the dog to understand how to jump correctly, confidently and with total understanding of the jumping task.
With good handling we can influence the speed and length of a dog’s stride, the way of how a dog approaches a jump, the take off point and the information of what happens next. While running in the course, we wish to guide our dog through the most optimal path, so that we can get the fastest time for each dog.

THE MECHANICS OF JUMPING
Jumping is a demanding mechanical process.
There are many joints, bones and muscles in a dog’s body that need to be activated in a certain moment and sequence so that a dog is able to make a jump. Jumping is a lot more complex than it seems at first glance.
Details are important and we must dedicate a lot of our attention to them.Regardless of the breed and the size of a dog, all dogs jump with the following sequence of movement: a dog approaches the jump, places his front feet – one slightly in front of the other- on the take-off point in front of the jump.
When the front feet are placed, a dog will lower his head and slightly bend the front legs, he bends his spine and carries his rear legs forward in front of the front feet, then he straightens the front legs and pushes the front end of the body upwards and lifts his head, so that it helps push upwards.
Rear legs then straighten and push his body up and forwards over the jump. When a dog is in the air, he lowers his head towards his stretched front legs, which helps his forward movement and reduces the resistance.
At the top of the arch, a dog will lower his head and lift his tail up and this helps the body to rotate forward and down. A dog then stretches the front legs forward and down, one in front of the other and prepares for landing. Then the front legs are on the ground, the rear legs move forward under his body, absorb some of the landing impact and continue forwards in the center gallop.
When a dog jumps, his body at first moves into the opposite direction of the clock, according to the center of his mass and gravitation. With the relaxing of the rear legs the center of his body mass starts spinning in the direction off the clock. With the lowering of the head and changing the position, a dog rotates the center of the weight forwards and this helps to make a jump and also determines the landing point.A jump is merely a gallop stride, it’s just longer and a dog also adds the upwards lift and horizontal power, so that a jump is complete. In the center (gallop), the rear legs push, one slightly in front of the other, which moves the body forward. The front legs stretch forward and land one in front of the other. They pull the body forward when a dog bends his spine, lifts his rear legs and pushes them forward to make the next stride. A canter is a gait which enables a dog to quickly change his speed and the length of the stride and enables him flexibility to change the speed in the last moment and adjust his stride before the take-off point.

If a dog lifts his head early while in the air, his mass will move to the hind end of the body. This will make his rear legs land at the same time or shortly after the front legs. Landing like this takes away the landing force from the front end, the force moves up from the front and rear legs together and both forces meet in the spine. This makes a bigger impact on the bones, muscles and tendons.
Besides, the front end must land first to enable a smooth continuation of forward movement. With the correct landing on the front end, the impact force will move up the front legs and will be dispersed because of the bending of the front legs and the spine.
When a dog is landing, he lifts his head just before touching the ground. This is how he softens the landing and it also takes away some of the impact force to the front legs. If a dog lifts his head during the jump, the landing will be very hard and stressful for his front end.

The correct biomechanics of jumping demands that the weight transfers to the hips, this is when a dog makes correct angles from his hips to the hocks. This acts like a spring – the better the angle, the greater the force of the push-off. This spring makes a dog move upwards. If a dog’s head is lifted high up, it will restrict the range of its movement and also the movement of the neck and shoulder. Also the back will suffer because of the wrong body position during movement. When the laws of biomechanics are not effectuated correctly, a dog will not move lightly and with relaxation forwards but will instead compensate for it with the improper use of muscles. He will compensate as long as his body allows it, in other words, until an injury or pain happens.

To better understand a dog as an athlete, we must understand his structure (according to a breed). Each part of a dog, which adds to a locomotive movement, is there for a reason.

To better evaluate our dog’s body and his abilities, we have to think about the type of the body he has and his size:
• We have to evaluate the proportion between the height and the weight of a dog: The heavier a dog is in comparison with his height, the harder and more demanding it will be for him to move and his bones and muscles will take on more stress. The smaller the ratio between the height and the weight, the easier it is for a dog to jump. The bigger the ratio, the more we must pay attention to a suitable program and the right fitness preparation of the dog.
• We also have to evaluate the length of the legs: The greater the length from the elbow to the ground, viewed as a percentage of the height measured at his withers, the greater advantage he will have when jumping. The reason being, the center of his body mass is higher so jumping over obstacles is easier.
• The length of the body: Dogs who are longer than their height, carry more weight on their front legs and need an additional fitness preparation.
• A bad body structure can seriously hinder a dog while jumping. A dog with a straight front structure will land with his legs in a more vertical position and will feel more impact when landing. Repeated jumping can cause too much pressure on the bones, joints and soft tissues of the front end and these dogs often endure elbow and shoulder injuries and develop degenerative illnesses of the joints. It is considered true that the rear legs are mostly important for adding force while running and jumping. This is why dogs with displaced hips, which restrict free movement in the hocks, have a restricted forward pushing ability. Because of the lack of this forward pushing force, they compensate with their front end and back. Consequently, these dogs will be prone to injuries of the back and the front end. (Source: biomehanika i kretanje psa, Eksterijer pasa: Milivoje Uroševič, Darko Drobnjak)

Dogs differ by: breed, size, weight, shape and structure of the body, physical abilities, movement and the length of the stride while galloping, spirit, personality… Our expectations must be based on this knowledge. Jumping exercises must be adjusted to each individual dog and we must think what is best for each dog, according to his personality, spirit and abilities.

Ease and relaxation is what we can see when an athlete performs a task well. There is a lot of practice and gradual learning of movement without added speed behind this. To maintain a good athletic fitness and a good technical performance, we must do the training on a regular basis.

If we want our dog to automatize the learned jumping technique and transfer it into a situation in agility, we must realize that we need to do many repetitions of different exercises and we need the dog to understand them.

If we want them to control and correctly use their bodies while moving at great speed, we have to teach them in a controlled environment and at lower speed. This is how they will create a correct muscle memory which will transfer to the agility parkour.

We must know that there are no short-cuts. In the beginning we must do a lot of repetitions (short sessions), and the learned behavior must be maintained throughout the whole agility career.

Only practicing a sequence will not give a dog enough time and focus to create a biomechanics which is necessary for good jumping skills.

The training of jumping never ends. Once a dog learns how to jump, we need to maintain his skills. We can expect that with training and repetitions our dogs will develop a better jumping ability over time. We must strive for making improvements daily. All healthy dogs have the ability to become good jumpers with solid foundation and training. During the process of learning, each dog must be treated individually.

Backside jumping is a demanding jumping skill. For a dog it represents a different kind of jumping challenge.
The preparation for a strain of jumping, which follows through the back side of a jump, begins, when your dog passes the jump. According to the angle of arrival at the jump, his bending will happen while he will be travelling around the wing of the jump. The extent to which a dog bends will differ and depends on the angle of his arrival to the jump and will also determine whether he will collect before the take-off point or jump in extension.
When a dog makes a turn behind the wing of a jump, he has to adjust his stride according to his take-off point. The placement of the take-off point and what the jump will be like, is determined by the following obstacle.

Jumping skills which are needed for backside jumps-out are:
• transfer of the weight to the rear inside leg,
• turning and bending around the wing of the jump,
• bending above the bar (double bending on the jump),
• arriving to the correct take-off point which supports the jump,
• the rear end of the back must be turned toward the inside of the curve,changing of the lead leg above the jump,
• regardless of the position of the handler, a dog’s focus must be on the take-off point and on the jump, slice with the turn,
• slice followed by straight exit,
• good concentration and physical ability.

Back to Top
Close
Close